Mahdi Hemingway’s life experiences belie his youth. The New Jersey native has served in the Marine Corps., volunteered on President Barack Obama’s presidential campaign, and worked on Wall Street as a stockbroker. And that’s just in his professional life.

But despite it all, Hemingway reached a point in 2015 where he was looking for a career shift. As he tells it, he had “some things happen in my life that made me do some introspection (about) what I should be doing with my life.” 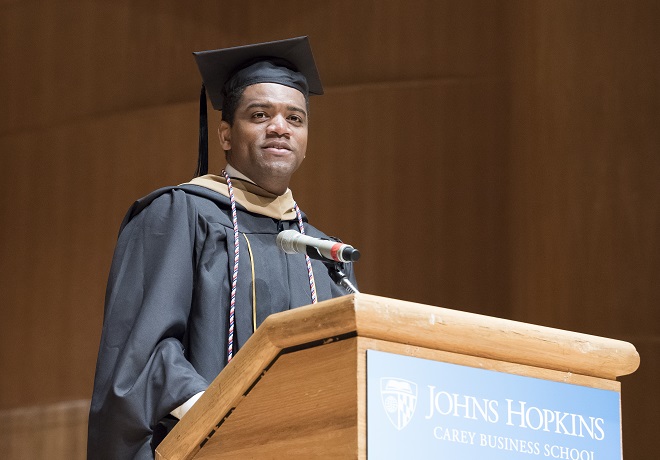 Fast-forward to spring 2017. Hemingway delivered the student remarks at the Johns Hopkins Carey Business School graduation where he walked across the stage and received his MBA degree. After graduating, he took a job with Exelon Corporation as a Senior Controls Analyst working on internal financial controls. It’s a job he says he wouldn’t have gotten without Carey.

“Coming to Carey is the greatest business decision I’ve made on purpose,” Hemingway said. “I came to business school to make a pivot – a pretty significant pivot – and Carey did that for me.”

Hemingway said he was drawn to Carey by three factors: the school’s motto, the Johns Hopkins reputation, and the Global MBA program’s international scope.

Regarding the school’s motto to teach “business with humanity in mind,” Hemingway said it appealed to him as a business school that broke the mold.

“That mission resonated with what I had been doing in my life. And I felt it would be the type of business school where I would fit in,” Hemingway said.

He said the school and program’s focus on recruiting a diverse, global student body – Carey students hail from more than 60 countries – was a big priority for him.

“I liked the global design of the program and the global reach of the university and knowing a significant portion of my classmates would be international,” he said. “I was lacking that in my experiences.”

Hemingway credits some members of Carey faculty and staff in aiding him during his pivot. He says the Career Development Office helped him land an internship with Exelon, which ultimately led to his full-time position. He recalls the advice he received from CDO before his interviews at Exelon.

“I think I came in with a certain level of skill and hustle, and they reminded me to tap into that and sell my strengths – my true self. Not to pretend to be someone I’m not,” he said.

He recalls similarly reassuring advice from Associate Professor Ricard Gil and Professor James Calvin, who he said calmed his nerves by giving him tips and confidence.

“I had never had relationships with professors like that,” he said. “These are folks I really appreciate getting to meet and developing a relationship with.”