It scored high marks as a pilot project in mid-2018. Now a Carey Business School mentorship program for underrepresented minority students is set for a full-scale rollout in spring 2019.

It scored high marks as a pilot project in mid-2018. Now a Carey Business School mentorship program for underrepresented minority students is set for a full-scale rollout in spring 2019.

Its strategy involves drawing heavily on the expertise, professional ties, and financial support of alumni of the school’s former Leadership Development Program for minority managers. 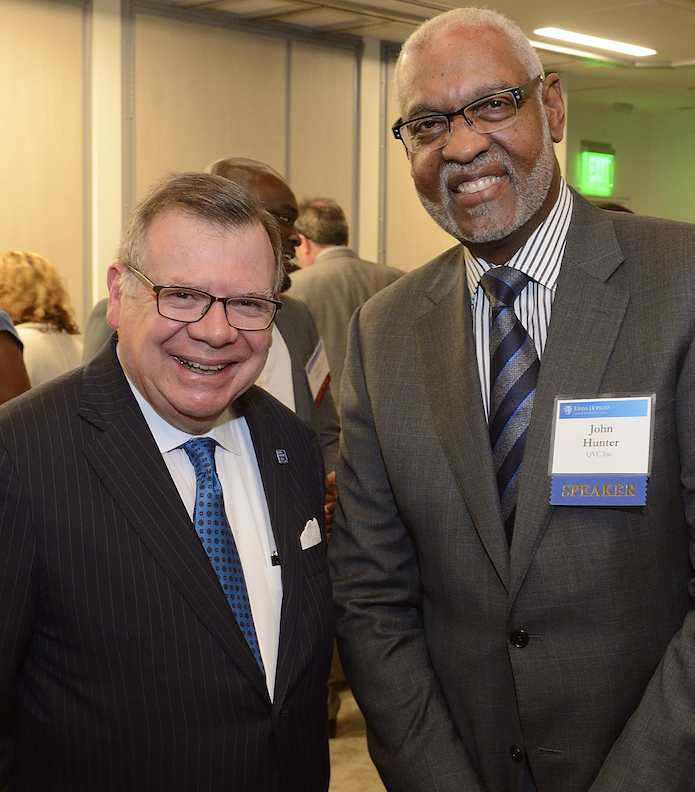 Dean Bernard Ferrari and John Hunter, a former executive vice president at QVC Inc. and a member of the Dean’s Advisory Council at Carey, are credited with spurring the creation of Leading a Diverse Society and the mentorship program. Hunter was a steadfast backer of the LDP during its 1991-2013 run and has been a generous supporter of student financial aid. Professor James Calvin, who directed the LDP for most of its existence, also contributed to the planning for Leading a Diverse Society as a new way to help underrepresented minority students was sought after the LDP’s end.

“Underrepresented minorities have to have a place at the table, not only to be part of the changes that will advance our society but to lead them,” Hunter said of the Leading a Diverse Society initiative in comments to The Hub, the Johns Hopkins University news website.

Thirteen matchings of mentors and student mentees were made for the pilot program. In November 2018, Carey began recruiting mentors for the 2019 edition. It is scheduled to run about six months, twice as long as the pilot, to encourage stronger bonds within each matched pair.

Mentors are expected to come primarily from the ranks of LDP alumni. Their point of contact at Carey is Roger Williams, senior associate director for diversity and inclusion in the Admissions Office.

Recruitment of underrepresented minority students as mentees is planned for February 2019. The goal is about 20 mentor-mentee pairs. Carey’s part-time Flexible MBA program is expected to provide the majority of the mentees, from both the Baltimore- and Washington, D.C.-based cohorts, as well as from online-only students.

Geography is no longer a deterrent to communication, especially for online students. Most of the contact between mentors and students will be via phone conversation, email, texting, FaceTime, and Skype, with occasional in-person meetings when possible, says Mary Somers, the Carey contact for the student mentees. Whatever the medium, one monthly communication per pair will probably be typical.

Somers, the associate director of coaching and education in the school’s Career Development Office, says she has high hopes for the mentorship program.

“Our mentors have been so successful in their own careers, and they give a lot of credit to the training they got here at Carey. So this is a way for them to give back,” she says. “It’s an opportunity for the mentors to share experiences and information that the students may not be able to get elsewhere at the school.”

Underrepresented minorities have to have a place at the table, not only to be part of the changes that will advance our society but to lead them.”

Shereece Benson, a licensed certified social worker at Holy Cross Health just outside of Washington, took part in the pilot mentorship program shortly before graduating last summer with an MBA.

Benson says her mentor, Chigozie Okorie – a senior network administrator at the Annie E. Casey Foundation in Baltimore and an alum of both LDP and the Carey MBA program – “was always available to speak with me on career and life. We spoke in-depth about conquering fear, the power of the ask, and reframing negative stories we always tell ourselves.”

The 2019 cycle of the Leading a Diverse Society mentorship program will officially begin with a Harbor East reception on April 5, during the annual slate of Alumni Weekend events.