Carey Business School Assistant Professor Manuel Hermosilla won a Johns Hopkins grant to study whether India has reduced its use of antibiotics of last resort after serving as ground zero for one of the world’s most dangerous superbugs, NDM-1.

Antibiotic resistance is one of the biggest threats to global health, according to international health organizations. “Superbugs” born out of overuse of antibiotics in humans and animals could kill 10 million people each year by 2050 if nations do not start to significantly curtail the use of the most powerful antibiotics, the United Nations estimates.

More antibiotic resistance is also expected to intensify the fatalities associated with pandemics such as the recent coronavirus, COVID-19, in China.

Manuel Hermosilla, an assistant professor of marketing at Carey Business School, recently won a Johns Hopkins grant to study whether India has reduced its use of antibiotics of last resort after serving as ground zero for one of the world’s most dangerous superbugs, NDM-1.

India has one of the world’s highest levels of antibiotic resistance because of over-prescribing by medical professionals, excessive consumption of over-the-counter versions, and overuse of the drugs in livestock.

“According to the World Health Organization, one of the biggest threats to global health is the growing number of infections — including pneumonia and tuberculosis — that are becoming harder to treat because of antibiotic resistance,” Hermosilla wrote in a summary of the grant he won from the Johns Hopkins Alliance for a Healthier World. “India is at the center of the crisis due to the high levels of antibiotic resistance among its population, but also because it was the first country in which the NDM-1 ‘superbug’ was identified.”

The NDM-1 (New Delhi metallo-beta-lactamase 1) has been detected in 70 countries and “has been touted as a ‘doomsday scenario of a world without antibiotics’ by public health experts,” Hermosilla notes.

Hermosilla will be conducting the research with Chirantan Chatterjee, a professor at the Indian Institute of Management Ahmedabad.

Noting that antibiotic resistance can lead to longer hospital stays, higher medical costs, and increased mortality, Hermosilla also observes that resistance is highest in poorer nations that can least afford such demands.

To counter the growth of antibiotic resistance, nations should be working with their health sectors to reduce the use of the strongest, last-resort antibiotics in order to preserve their effectiveness, Hermosilla and other experts advise.

If Hermosilla and Chatterjee find that India has not slowed excessive use of such antibiotics, they will develop and recommend policy interventions. 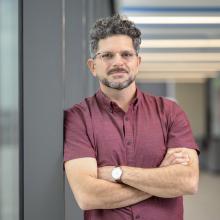 Manuel Hermosilla is an Assistant Professor of Marketing at the Carey Business School. He joined the School in 2014 after completing his PhD at Northwestern University’s Kellogg School of Management. ­Previously he earned Bachelor and Master degrees in Economics from the Pontificia Universidad Catolica de Chile. He is an empirical researcher with rooting in Economics and Quantitative Marketing.

We're actively monitoring the COVID-19 pandemic. Learn what Johns Hopkins Carey Business School and our university are doing to ensure the health and safety of the Carey community.

Get the latest updates