Designed to fit the demanding schedules of the working professional, the Flexible MBA offers a curriculum that blends traditional and project-based courses. 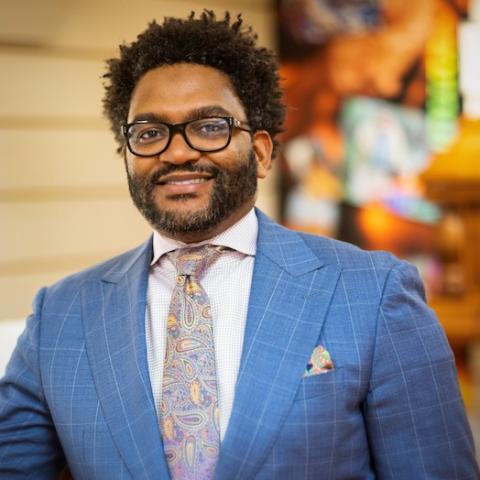 Brandon Wylie (Flex MBA ’19), one of Baltimore Business Journal’s 2019 “40 under 40” people to watch, approached his studies at Johns Hopkins Carey Business School a little differently than most students. As the second-generation head of one of Baltimore’s best-known funeral homes, Wylie Funeral Homes, P.A., he had tackled successive levels of leadership early in his career. Now, he wanted to put himself in his employees’ shoes to better learn their perspectives and ideas.

“I wanted to learn how to follow” in order to be a better leader, Wylie explained. Company staff were used to Wylie’s father, Albert, who founded the business, employing a hands-on style, typical of many people who build a business from the ground up. Now with the company firmly established, it was especially important to maximize input from all who had a stake in its continuing success.

“How can I change the culture my father had left?,” Wylie remembers wondering. He found he had to “ease staff” into a cultural change empowering individual ideas and initiatives. Wylie, who jokes that his father is working on his “third retirement,” credits him with making the transition possible. “[It was] the trust that he gave to do different things, implement different strategies,” he said. “[He] gave me the opportunity to make my own decisions.”

An MBA for lasting impact

Carey Business School’s Flexible MBA also exposed Wylie to different models and frameworks of how businesses are run, and how he could implement them. The degree, he said, allowed him to give his staff “autonomy” to develop their own ideas and strategies. “We are working as a team to develop these concepts to change the way funeral services are done,” he adds.“I’m all about education” said Wylie, a Morgan State University and Baltimore City College graduate, whose mother was a Johns Hopkins graduate and Baltimore City Public Schools teacher.  “I’m looking for ways to grow the business. [The funeral] industry is a billion dollars large, but there’s no real information on how to manage this type of business.

“I was born in Baltimore … this is my home, and I have to keep providing hope for my home. You can talk about it, but when you do it, [people] can see a representation of something to follow.”

One of Carey’s core values, unwavering humanity, resonates especially strongly with Wylie, who served on the board of Living Legacy, an organ donor procurement program. It was a chance, he said, to better educate the African-American community about organ donation and increase the supply of available organs in the process. The Wylie Foundation also sponsors the “Wylie Wishing Well,” where cancer patients 2-18 years of age can have their wishes fulfilled.

Building for what’s next in Baltimore

Currently, Wylie is redeveloping a flower shop housed in an old brownstone on Baltimore’s North Avenue into a new and improved floral boutique called Fleurs d’Ave. “I didn’t want to see another dilapidated building on our corner,” he said.  Until construction on the building is complete, the flower shop is currently being operated within another one of Wylie’s businesses, “Above it All” LLC, which focuses on child development and life skills, leading to success in school. Both ventures are run out of what was the original Wylie Funeral Home that also once doubled as the family’s residence, on Gilmor Street in West Baltimore.

“I want to provide for the community economically and make sure there are jobs in the community for people to have,” said Wylie, who stresses action and results. “I was born in Baltimore … this is my home, and I have to keep providing hope for my home. You can talk about it, but when you do it, [people] can see a representation of something to follow.”