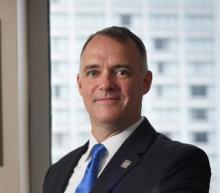 David M. Vahos is senior vice president, chief financial officer and treasurer of BGE. In this role, Vahos oversees the treasury, financial planning and analysis, operational finance and accounting functions for the company.

Vahos joined BGE in May 1998. During his BGE tenure, he has been responsible for establishing accounting practices related to the deregulation of the electric generation portion of the company and has served in supervisory capacities in both general and regulatory accounting. In May 2006, Vahos was appointed director, financial planning and analysis with responsibility for detailed operations, maintenance and capital budgeting, as well as playing an active role in regulatory filing and rate case strategy. In October 2010, Vahos was appointed executive director, corporate audit for Constellation Energy responsible for directing internal audit and consulting engagements for Constellation New Energy and BGE. In February 2012, he was named vice president and controller and was responsible for financial accounting and reporting for BGE, performance of controls, and preparation of financial reports for management, shareholders and regulatory agencies. Prior to joining BGE, Vahos served as senior accountant at KPMG Peat Marwick, LLP focusing on assurance and consulting services, as well as compliance and financial statement audits.