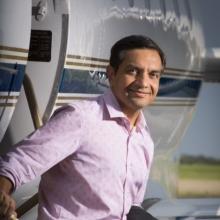 Sridhar Tayur is the Ford Distinguished Research Chair and University Professor of Operations Management at Tepper School of Business, Carnegie Mellon University. He is an INFORMS Fellow, a Distinguished Fellow of MSOM Society and has been elected to the National Academy of Engineering. He currently serves as the Department Editor in the Entrepreneurship and Innovation department of Management Science.

An Academic Capitalist, Dr. Tayur was the founder and CEO of the software company SmartOps[acquired by SAP] and is the founder of a social enterprise, OrganJet+Guardian Wings. SmartOps is thesubject of a Darden Case (distributed by HBS) and OrganJet+Guardian Wings of an HBS Case. His work has been profiled in Fortune, The Atlantic, Forbes and NEJM. A limited partner (LP) in Venture Capital firms, he also serves on the board of several startups and not-for-profit organizations. Through his RAGS Charitable Foundation, he has supported Carnegie Mellon and Cornell, has endowed an Institute Chair at IIT-Madras, and is an executive producer of three documentary films, including the upcoming Vax Wars and the award-winning WBCN and The American Revolution (on PBS this fall, nationwide).

Dr. Tayur received his Ph.D. from Cornell University and B.Tech. from the Indian Institute of Technology (IIT) Madras. He has won the Gerald L. Thompson Undergraduate Teaching Award, the George Leland Bach Excellence in Teaching Award given by MBA students, the INFORMS Teaching Case award, and was named a “Top Professor” by Business Week. He has published in Mathematics of Operations Research, Mathematical Programming, Operations Research, Management Science, and M&SOM.