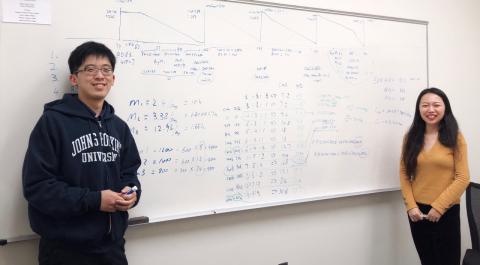 The challenge presented to all schools was a simulated exercise in bailing out a hypothetical near-bankrupt firm and subsequently making it as profitable as possible, by investing in capacity, seeking financing from banks, streamlining inventory, pricing products dynamically, and improving management customer relations. (Known as “Littlefield Technologies,” this factory simulator, used at more than 50 business and engineering schools, was co-developed by Johns Hopkins University provost Sunil Kumar while an assistant professor of operations management at Stanford University Graduate School of Business.) The intensive experience called upon students’ top-notch analytics, operations, and leadership skills, among other talents.

“Our Global MBA students have clearly demonstrated that they belong to the best and brightest,” said Tinglong Dai, associate professor of Operations Management and Business Analytics, and an adviser to Carey’s MIT Sloan Competition teams. “In addition to the winning team, all of the other three teams from Carey made it to the top 20, a rare and remarkable record.”

This honor was just the latest in several competition achievements over the past few months. In February, a first-ever team of Carey and Maryland Institute College of Art (MICA) students studying together in the MBA/MA in Design Leadership program made the final round and presented to judges in the prestigious Rotman Business School Design Challenge. Also in February, a team of Johns Hopkins University students, including three from the Carey Business School, won first prize in the annual Yale Healthcare Case Competition, while another Carey student won a personal award at the Fisher KeyBank Minority Case Competition. In addition, that same month, a team of Carey students finished first in the Washington, D.C./Baltimore area CFA Institute Research Challenge.