When substance use disorder patients were tested for both HIV and hepatitis C virus (HCV) at the same time and given the results within 20 minutes, they were far more likely a month later to indicate they had received results, compared with patients who were referred for testing services, according to a new study led by a Johns Hopkins University researcher.

For the study, newly published in Medical Care, 162 patients at two New York City treatment facilities were divided into a treatment group that immediately got test results and post-test counseling, and a control group that was referred off-site and encouraged to get tested, as is standard practice.

None of the study participants tested positive for HIV. Seven from the immediate-results treatment group tested preliminary-positive for HCV, and one from the referral control group reported getting an HCV-positive result, says lead author Jemima Frimpong, a Johns Hopkins Carey Business School associate professor with expertise in decision making within health care organizations.

The findings suggest that jointly offering HIV and HCV testing on-site and providing immediate test results would help increase infection awareness among people with substance use disorders who don’t know they have HIV or HCV. It also means greater opportunities for getting patients in treatment and improving their quality of life. At the facility level, managers will have a more accurate picture of infection rates, which can then inform how they organize service delivery, Frimpong says.

Such numbers have led the federal Centers for Disease Control and Prevention to recommend routine HIV and HCV testing for people with a history of substance use.

Patients typically are tested at facilities other than their usual treatment centers, and they must return days later to get the results. Often, they are unable or unwilling to make the return visits – as reflected in the study’s finding that only about a fifth of patients in the control group later said they knew their test results. Frimpong says this indicates “lapses in the care-delivery process, which may have negative consequences for increasing awareness of HIV and HCV infections, and for early initiation of treatment.”

Conducting tests at patients’ regular treatment centers with results in 20 minutes has significant advantages over the traditional approach to testing, says Frimpong.

“The rapid test kits that were used in our study did not take blood from a vein; it was done less invasively, with a finger stick. These tests can be performed by program staff with limited but focused training. The kits are also highly accurate in detecting HIV and HCV, and do not require a return visit for the patient. In addition, rapid HIV and HCV testing has been shown to be cost effective,” she says.

The study covers new ground with its development and test of a comprehensive package of strategies for rapid testing for HIV and HCV, Frimpong says. She adds that future research could examine how health care organizations might best implement the rapid testing strategy for HIV and HVC. 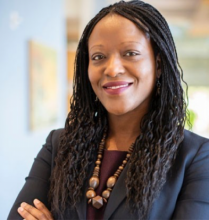 Jemima A. Frimpong, PhD (Management Science and Applied Economics, The Wharton School at the University of Pennsylvania) is an Associate Professor at the Carey Business School. She is also a faculty member of the Armstrong Institute for Patient Safety and Quality at the School of Medicine. Before joining Johns Hopkins University, she was on the faculty of Columbia University.