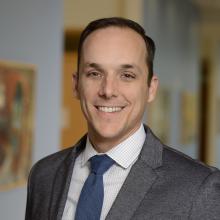 Now an Academic Program Manager and previously a senior associate director of advising, Jeff has been advising students at Carey since 2014. He works with part-time students across all degrees. Prior to his time at Carey, Jeff worked for a variety of secondary and post-secondary institutions in many support roles including career counseling, residential life, and advising. He earned his bachelor’s degree in music education from Northwestern University and his master’s in counseling from Teachers College in New York. Jeff loves being a part of higher education communities and believes in the power of education to improve lives and societies. In his spare time, he enjoys singing, watching soccer, and drinking local craft beer. 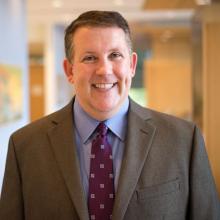 John has been involved in academic advising, mentoring, and coaching for more than 15 years with graduate and undergraduate students in higher education. He holds two master’s degrees: one from the University of Chicago School of Social Service Administration with concentrations in policy analysis and community organizing, while the other is from American University with concentrations in dance education, performance, and history. John enjoys performing and takes dance classes when time allows. 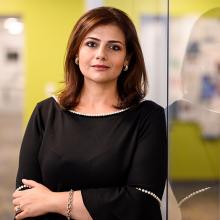 Yassi discovered her passion for higher education advising during her post-graduate experience at American University. While earning her LLM degree in law and government, she worked with graduate and post-graduate scholars as their academic advisor at the Cultural Division of the Embassy of the State of Kuwait in Washington, D.C. Since 2007, she has built a career in higher education and has been an academic advisor for Carey Business School students since 2012. She earned her LLB from Shahid Beheshti University of Tehran and an LLM in immigration law and administrative policy from American University Washington College of Law. Her passion is to see her students succeed and she takes pride in enabling them to take ownership of their academic journey.

Prior to joining Carey, Michael worked as an international academic advisor for Walden University’s online PhD in Management and Doctor of Business Administration programs for more than five years. He most recently worked for more than two years as an academic advisor with Towson University’s College of Business and Economics, advising undergraduate students in the business administration and accounting majors. Before working as a professional advisor, Michael completed his BA and MA in English with a concentration in literature at Salisbury University. In addition to his years of professional advising experience, Michael has also taught undergraduate English composition and literature classes as well as an undergraduate business communications course.  In his spare time, he likes to read and travel. 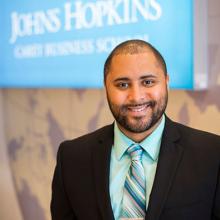 Prior to joining the Carey Business School, Jud worked for Bowie State University and has a community college background from working at Chesapeake College. He was an academic and career advisor, TRIO program coordinator, adjunct English faculty, and transfer advisor to four- year schools. Jud holds a bachelor’s degree in sport management from the University of Massachusetts and a master of science degree in psychology with concentrations in educational and sports psychology from Capella University. Outside of the advising office, he enjoys spending time with family and friends, catching up on anime, gaming, and relaxing outside on the weekends. 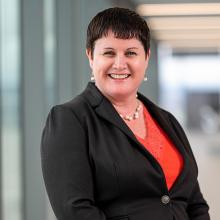 Jackie brings more than 15 years of experience in international student advising, international admissions, and study abroad advising to her current position, all of which have academic advising components. Her work has taken her to 16 countries in Europe, Asia, and North America.  She has a bachelor of arts in sociology and master of science in counseling/college student personnel from Shippensburg University of Pennsylvania as well as a post-baccalaureate diploma in business management from Elizabethtown College (also in Pennsylvania).  Outside of work, Jackie enjoys spending time with friends and family, as well as her cats.

LaToya has worked in higher education for the past decade. Originally from New Jersey, she attended Rutgers University for both her undergraduate and graduate studies where she pursued a Bachelor of Arts in Psychology and a Master of Education in Counseling Psychology. In addition, she worked at Rutgers for 9 years in various capacities including program coordination, academic advising, and student services. LaToya relocated to Northern Virginia in 2016, at which point she began her work at non-profit organizations. Most recently, she worked for the Common Application, located in Arlington, VA where she served as a Member Relations Manager – working with various member universities and colleges on the development of their admissions applications.  LaToya is very passionate about helping others find their path.  In her spare time, she enjoys a good cup of coffee, a quality TV show, and promoting mental health awareness.

Adaria has worked in higher education for over a decade. Prior to joining Carey, she worked in advising capacities at Community College of Baltimore County, Harford Community College, and most recently, Baltimore City Community College. She earned her Bachelors of Science in Communications with a concentration in Public Relations. Her Master’s Degree in Communications Management. Her doctoral dissertation is entitled “ Matter or Marginality: A Case study of African American students’ experiences that participated in a proactive intervention at a predominantly white community college”. She has passed her defense and will complete her requirements for the Doctor of Education degree at Morgan State University later this year. Adaria is a native of Baltimore and graduated from Mercy High School. Outside of work, she enjoys spending time with her family and shopping online.