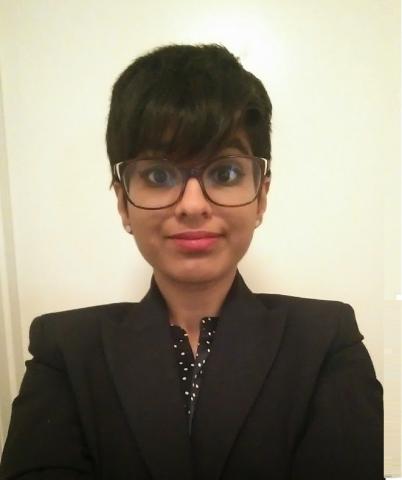 Ritu Ghosh is not your average finance student. The way she talks about finance is like the way an artist discusses his latest painting or a filmmaker describes her magnum opus. Ask her about a concept like net present value or blockchain technology, and it won’t take long to see this passion for yourself.

“I’ll be talking to people, and they’ll say, ‘You actually, really enjoy this, don’t you?’” said Ghosh, a student in the Carey Business School’s MS in Finance

program. “I think a lot of people get into finance for the money. For me, it’s never been about that. I got into finance because I love finance; I’d do it if it paid me nothing.”

If you told Ghosh her enthusiasm for finance sounds implausible, she’d probably agree with you. She’s not naïve about some of the perceptions of the finance world, or the people who work in it. In fact, she’s experienced it first-hand.

Ghosh’s original career goal was to become an investment banker. But she quickly became disillusioned with that prospect the more she learned about it.

“I feel like I would be really good at it, but unless you come from a certain place or have a certain background, they won’t even look at you. And I don’t like that; I don’t think that’s fair,” she said.

At Carey, she says she’s found her true calling: to be a disruptor in an industry that some argue could use some disrupting.

“There is a huge distrust for finance institutions because there is a lack of communication between the institutions and the people. I want to bridge that gap. I want to say, ‘This is your money, you should know what to do with it; you should know what’s happening to it.’ If you ask most people about their money, they don’t know the answers. And that’s really silly because it’s their money,” she said.

Her pursuit has led her to financial technology or FinTech, a fast-emerging sector of the financial industry. Specifically, Ghosh is interested in blockchain technology, which was created through the emergence of the digital currency bitcoin. Essentially blockchain technology is a new, more transparent way to record and report financial transactions that bypasses traditional banking conventions.

Ghosh says she first got interested in the topic during The Economist’s MBA case competition, where she was one of Carey’s representatives. She was really hooked after attending a conference called fintech4good.  She’s parlayed her knowledge into an internship at the Chamber of Digital Commerce, the largest advocacy group for digital commerce in the United States.

“I really, truly believe FinTech is the future,” she said. “Long-term, it’s what’s needed to make the system more efficient.”

Ghosh says her goal to become a leader in FinTech is closely tied to her commitment to Carey’s mission of teaching business with humanity in mind.

“The more and more I am here, the more I believe in business with humanity in mind,” she said. “When I look at entrepreneurs, they all have one thing in common: They look at the world and say, ‘What’s missing? How do I make the world better?’ That’s what I want to do.”

An Australian native, Ghosh was an undergraduate at Sam Houston State in Texas. She said she didn’t know much about Baltimore or Carey before applying and learning about the school, but she’s quickly realized the value of those two assets.

“I’m really starting to love Baltimore. I love our campus, and having access to all the other Johns Hopkins University facilities is amazing,” she said. “I didn’t realize how big a deal the Hopkins brand is. Even though the business school is new, the moment you say you go to Hopkins, you have instant credibility.”