Karen Peetz, the former president of BNY Mellon, will deliver the main address at the summer graduation ceremony of the Johns Hopkins Carey Business School on Thursday, August 3, 2017, at the Joseph Meyerhoff Symphony Hall in Baltimore.

Karen Peetz, the former president of BNY Mellon, will deliver the main address at the summer graduation ceremony of the Johns Hopkins Carey Business School on Thursday, August 3, 2017, at the Joseph Meyerhoff Symphony Hall in Baltimore. 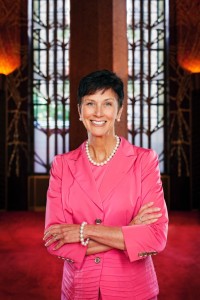 Peetz, who retired from BNY Mellon at the end of 2016, appeared regularly on American Banker magazine’s annual list of the “25 Most Powerful Women in Banking.” An alumna of the Carey Business School (MS ’81), she is a member of the Johns Hopkins University board of trustees and Carey’s financial businesses advisory board.

Bernard T. Ferrari, dean of the Carey Business School, said, “We at Carey are proud and delighted that Karen Peetz will be our graduation speaker in August. We are particularly pleased that such an accomplished and highly regarded expert from the field of finance will be addressing our graduates-to-be as a Carey alum herself. I know they will derive great value from Karen’s remarks.”

Peetz joined BNY Mellon in 1998 to guide the domestic corporate trust business. Before being named president in January 2013, she led the institution’s financial markets and treasury services group. Prior to her time at BNY Mellon, she worked at JP Morgan Chase for 16 years in various sales and business management positions, including an assignment in London.

After retiring from BNY Mellon, Peetz joined the board of Well Fargo. She also has served on the boards of the Securities Industry and Financial Markets Association, Private Export Funding Corporation, American Red Cross of Greater New York, and Global Lyme Alliance, and has served as a chair of the board of the United Way of New York City and the board of trustees of Pennsylvania State University, her undergraduate alma mater. She is also a senior advisor to McKinsey.

Accredited by the Association to Advance Collegiate Schools of Business, the Carey Business School was established by Johns Hopkins University in 2007. The school’s mission supports business knowledge development and education through its own initiatives, innovations, and collaborative programs across Johns Hopkins University. Carey creates and shares knowledge that shapes business practices while educating business leaders who will grow economies and societies, and are exemplary citizens.